If you drive up the A95 from the south of the A95, which runs parallel to the River Spey, towards Dufftown, you come to the small town of Craigellachie, which is located in the heart of the Speyside whiskey region between the well-known “whiskey towns” Aberlour, Rothes and Dufftown. Where the Fiddich flows into the Spey is the Craigellachie Bridge, built by the famous Scottish engineer Thomas Telford.

The distillery named after the village is located on the southeast bank of the Spey, across from Macallen. As is so often the case with the Scottish distillery names, the interested person wonders how Craigellachie is actually pronounced? “Craig-ella-ki” is pronounced with a short “i” at the end.

The distillery was built in 1891 by a consortium, the Craigellachie-Glenlivet Distillery Company, during the whiskey boom in the late 19th century. Co-owners were i. a. Alexander Edward and Peter Mackie, who continued the business of his uncle James Logan Mackie (founder of White Horse). However, the production did not start until 1898.

From 1916 onwards, some takeovers followed. At first, Mackie & Co. Distillers Ltd. In 1927 the overpowered Distillers Company Limited (DCL) took over the investment from White Horse Distillers in order to sell it to Scottish Malt Distillers (SMD) in 1930.

In 1964/1965 the distillery was rebuilt and the number of stills was increased from two to four. Particularly worth seeing is the stilhouse, which is visible from the street and is glazed towards the street and allows a beautiful view of the imposing copper pot stills.

In 1987 Craigellachie was sold to United Distillers & Vintners (UDV), which they finally resold to Barcardi in 1998 together with the distilleries Aberfeldy, Royal Brackla and Aultmore.

The style of the Craigellachie malts is characterized as followed:
Sweet, malty and nutty with fruity aromas. A typical representative of the Speyside region. 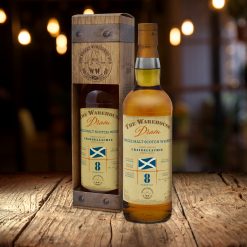